JLPT is the examination to award a certificate of your japanese level.
you can refer to this link for details.
i am gonna try to take a level 2 examination by end of this year.
So a lot of study need to be done to achieve for level 2 .
It is more difficult than level 3 definitely!

This article describes sound symbolic or mimetic words in the Japanese Language. Most languages have such words; for example, "bang", "zap", "ding", "slither", "pop", etc. in english. Sound symbolic words occur more often in Japanese (and Korean as well, although this article will only be concerned with the former) than in English—they are found in formal as well as vernacular language.

These words cannot be considered onomatopoeia. Many mimetic words in Japanese are for things that don't make any noise originally, most clearly demonstrated by しいんと shiinto, meaning "silently".

Kanji are the Chinese characters that are used in the modern Japanese logographic writing system along with hiragana (ひらがな, 平仮名), katakana (カタカナ, 片仮名), Arabic numerals, and the occasional use of the Latin alphabet. The Japanese term kanji (漢字) literally means "Han characters".

History
Chinese characters first came to Japan on articles imported from China. An early instance of such an import was a gold seal given by the emperor of the Eastern Han Dynasty in 57 AD[1]. It is not clear when Japanese people started to gain a command of Classical Chinese by themselves. The first Japanese documents were probably written by Chinese immigrants. For example, the diplomatic correspondence from King Bu of Wa to Emperor Shun of the Liu Song Dynasty in 478 has been praised for its skillful use of allusion. Later, groups of people called fuhito were organized under the monarch to read and write Classical Chinese. From the 6th century onwards, Chinese documents written in Japan tended to show interference from Japanese, suggesting the wide acceptance of Chinese characters in Japan.

The Japanese language itself had no written form at the time kanji was introduced. Originally texts were written in the Chinese language and would have been read as such. Over time, however, a system known as kanbun (漢文) emerged, which involved using Chinese text with diacritical marks to allow Japanese speakers to restructure and read Chinese sentences, by changing word order and adding particles and verb endings, in accordance with the rules of Japanese grammar.

Chinese characters also came to be used to write Japanese words, resulting in the modern kana syllabaries. A writing system called man'yōgana (used in the ancient poetry anthology Man'yōshū) evolved that used a limited set of Chinese characters for their sound, rather than for their meaning. Man'yōgana written in cursive style became hiragana, a writing system that was accessible to women (who were denied higher education). Major works of Heian era literature by women were written in hiragana. Katakana emerged via a parallel path: monastery students simplified man'yōgana to a single constituent element. Thus the two other writing systems, hiragana and katakana, referred to collectively as kana, are actually descended from kanji.

In modern Japanese, kanji are used to write parts of the language such as nouns, adjective stems and verb stems, while hiragana are used to write inflected verb and adjective endings (okurigana), particles, native Japanese words, and words where the kanji is too difficult to read or remember. Katakana is used for representing onomatopoeia, non-Japanese loanwords, certain naming, and for emphasis on certain words.

Readings
Because of the way they have been adopted into Japanese, a single kanji may be used to write one or more different words (or, in most cases, morphemes). From the point of view of the reader, kanji are said to have one or more different "readings". Deciding which reading is meant depends on context, intended meaning, use in compounds, and even location in the sentence. Some common kanji have ten or more possible readings. These readings are normally categorized as either on'yomi (or on) or kun'yomi (or kun).

These are some links that might be useful for us to learn more about Kanji :
Kanji A Day . com


#credits to wikipedia
Posted by Unknown at 10:38 AM No comments:

Katakana (片仮名, カタカナ or かたかな, Katakana) is a Japanese syllabary, one component of the Japanese writing system along with hiragana, kanji, and in some cases the Latin alphabet. The word katakana means "fragmentary kana", as the katakana scripts are derived from components of more complex kanji.

Katakana are characterized by short, straight strokes and angular corners, and are the simplest of the Japanese scripts.

There are two main systems of ordering katakana: the old-fashioned iroha ordering, and the more prevalent gojūon ordering.

Katakana are also be used for onomatopoeia, words used to represent sounds; for example pinpon (ピンポン, pinpon), the "ding-dong" sound of a doorbell, would usually be written in katakana.

Technical and scientific terms, such as the names of animal and plant species and minerals, are also commonly written in katakana.
*credits to Wikipedia*

Let's see the table of katanaka together with their sounds in roman. 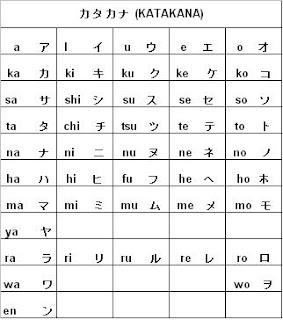 Now everybody here are able to read katakana right?
Ok to confirm whether you are really understand katakana or not,
let me give you some homeworks .
How about creating your own / nick names in katakana,
or try to spell your country names in katakana. 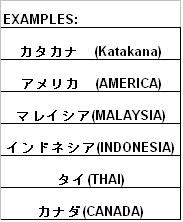 p/s: My nick name is Mai,convert to katakana it will be like this ( マイ) 、luckily Japanese people always use Mai for their daughter's name.It also can be written as 舞 in kanji character, meaning (dance).

Therefore many people believe that japanese is hard to learn because they need to memorize these three methods.
But don't worry guys , old japanese always said :

Ganbareba Nandemo Dekiru (If you work harder, anything will possible to get)

The following chart shows the hiragana together with their romaji (read in romaji). 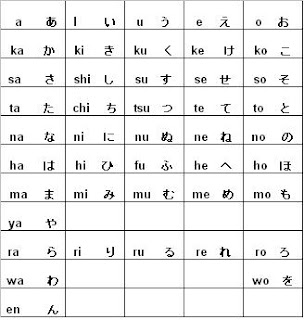 Let's see how hiragana is used in japanese writing.
Examples: 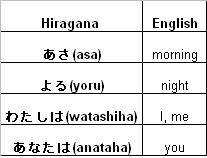 Posted by Unknown at 2:08 PM No comments:

Part One : Self Introduction

Hi, let me introduce myself as kemai.
This page is created to share about some of japanese language that i had experienced since 8 years ago until now.
As you all know most Japanese ppls do not speak english well,
to get closer to Japanese you need to follow their language.
There are a lot of benefits when you got to understand japanese language.First you will get easily involve with Jps friends ,and also could explore Jps book of technologies (high-tech),their culture and art ,traveling,and of course you can read MANGGA and watching Anime movie without subtittle .So in this little space,I would like to dedicate to you guys,my online Jps class.I will try to add as much as i know about JP language here .
Feel free to contact me if you have any inquiries.
Your comments are highly appreciated .
Thank You for visiting my page .
quote for today:
“The beautiful thing about learning is that no one can take it away from you.”-B. B. King
Posted by Unknown at 11:44 PM No comments:

Hi all,
This page is dedicated to those who want to learn japanese language at beginner level .
Thanks 4 visiting, and appreciate your comment or suggestion to improve this website.

Once Upon A Time In Asakusa 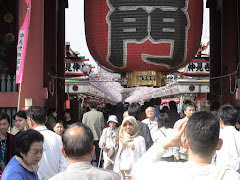